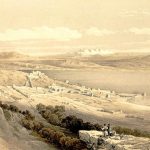 The name â€œPalestinaâ€ was given to the Land of Israel by the Romans in the year 135AD.
The name alluded to the Philistines, a seafaring people who ceased to exist during that period.
Even after the Arabs conquered the land, they never attributed it any independent status or special importance.
The Land of Israel was neglected and considered insignificant territory.

For hundreds of years, the land was desolate and almost uninhabited, in part due to its harsh conditions.
Various testimonies from Christian pilgrims in the early 19th century describe the scarce population of the Land of Israel.
It turns out that at least some of the inhabitants came from other territories under Ottoman rule.
They were not natives, but rather Arab immigrants encouraged by the Ottoman initiative to develop the land.

The Arab claim that there was a â€œnative population in the land of Israel that was expelled by the Zionistsâ€ is just not true:
Zionism was actually the reason for the rapid increase in Arab immigration and settlement in the land.
In the mid-19th century, Jews made significant efforts to develop the land.
Their attempts to work the lands they had purchased,Â attracted many Arab immigrants hoping to make their living in the land of Israel.

Arab immigration got another boost with the arrival of the British mandate.
The mandate added advanced infrastructure to Jewish efforts and created more economic opportunities.
In this way, Jewish efforts and British investment caused the rapid increase in the number of Arab residents in the Land of Israel.
This increase cannot be the result of natural population growth.
This leads us to only one conclusion:Â The majority of the people who the Arabs claim to be â€œrefugeesâ€, are actually immigrants and nomads, not natives.
Even if we consider the numbers provided by the UN regarding the Arab population,
it turns out that around 300,000 of the people considered â€œrefugeesâ€ were not even natives.

During the wave of mass Arab immigration to the land of Israel,Â nationalistic movements incited the immigrants against the Jews,
claiming they were a threat to the rule of the wealthy Ottoman Effendi over the poor peasant class.
This resulted in harsh violence and pogroms against the Jewish settlement that took many lives and harmed the Zionist enterprise. During WW2 and the Holocaust, Arab residents of the land of Israel,
led by the Grand Mufti of Jerusalem Haj Amin al-Husseini,Â actively supported the Nazis.
The Mufti even became a friend of Hitler and was personally involved in the plan to exterminate the Jewish people,
including its execution.

Following the creation of the State of Israel, Arabs turned their claim of refugee status into a weapon in their fight against the newborn state. For this purpose, the number of â€œrefugeesâ€ was more and more inflated,
and Arab states purposely avoided helping them in order to make their situation seem much worse.

Israelâ€™s Arabs in effect became victims of their own peopleâ€”The Muslims and the Arabsâ€”who used them to achieve their political goals, and perpetuated their status as dwellers of refugee camps, ignorant and hopeless. Â

The Arab states used their political power in the UN, which is derived from their control over oil reserves, in order to apply double standards when it comes to Israel. Due to their influence, UNRWA was established: a unique UN agency for serving the needs of the Palestinian refugees. All other worlds refugees are handled by UNCHR. The definition of a Palestinian refugee is also unique, and is essentially different of that of any other refugee. By this definition, every Arab who was in the Land of Israel in 1946 (Only for two years) is considered a refugee. In contrast with the definition of the usual refugee, that is not inherited, the Palestinian refugee status goes from generation to generation, intentionally perpetuating it. Thus, the number of refugees increases almost 20-fold, instead of diminishing. The result is a huge inflation of the number of actual refugees. Moreover, At least 300,000 of the people considered refugees in 1948 were in fact immigrants who had just arrived. Many other residents joined the refugee camps hoping to receive UN assistance. All these are used to politically bash Israel and damage also the Palestinians, who are robbed of the chance of escaping the refugee state plights

By dividing the western part of the Land of Israel into three main areas of Jewish settlement, we can discuss population growth rates: In areas with a high density of Jewish population, there were at the most 92,300 non-Jewish residents in 1893.

The Arab states refrained from helping the Arab refugees to integrate into their place of residence, and in fact exacerbated their distress, so that it might become a propaganda weapon against Israel. This despite the fact that many solutions have been proposed for their rehabilitation.

In 1950, the United Nations Relief and Works Agency (UNRWA) was established. Its purpose was to deal with Arab refugees. First, it undertook to conduct a census of refugees. The definition of a refugee was: â€œA person who habitually lives in the Land of Israel, and as a result of hostilities, his home and livelihood were lost â€¦â€

Arabs in general and the Grand Mufti in particular sympathized with Hitler and the Italian leader Mussolini. Haj Amin Al-Husseini fled Jerusalem in 1920 after being sentenced to ten years in prison for inciting violence against Jews.

One of the main arguments in the Palestinian narrative or in the story they tell themselves and others, is the existence of an Arab population dating back â€œthousands of yearsâ€ that was supposedly uprooted during the 1948 war.

One of the claims of the Palestinians regarding their alleged right to the Land of Israel is that Arab Muslims have an emotional connection to the land in â€œPalestineâ€â€”a connection forged by a consistent presence in the land for thousands of years.